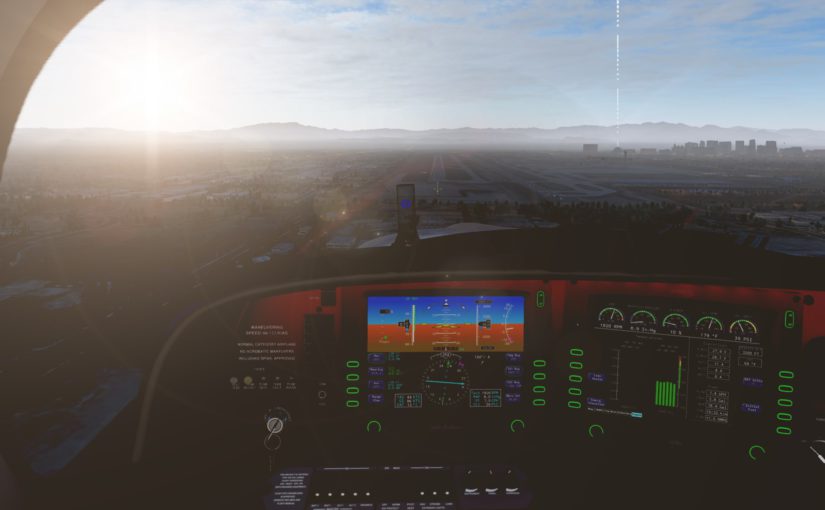 TorqueSim, RealSimGear, and X-Aviation are excited to finally announce our next products coming to X-Plane, the Take Command! SR20 and Take Command! SR22 Series, Entegra Edition. The SR22 Series will include both the normally-aspirated and Turbo-Normalized variants.

We are entering the testing phase of this aircraft now. No release date has been set, but it is coming soon! These aircraft will be sold separately from the SR20 and SR22 G1000 editions, upgrade pricing will be offered to existing customers.

The Entegra Avionics also are designed for RealSimGear’s new Entegra Desktop Console which features backlit buttons and knobs and 10.4″ IPS displays. More details can be found at RealSimGear’s website.

The TorqueSim/RealSimGear Entegra simulation is setting the bar for X-Plane GA Avionics. The custom developed avionics suite accurately replicates the Entegra avionics, both with PFD and MFD functions. This project has been a massive undertaking in developing our first fully-custom avionics package. Simulating the Entegra R8 flight deck will provide the ultimate platform for flying and learning. Also, new to the aircraft, a popup Angle of Attack indicator!

The Entegra PFD features a proper boot sequence, simulated avionics modules, and more. The altimeter of course can be switched between InHg and Mb units. The CDI can show (and drive the autopilot) from either GPS 1, GPS 2, NAV 1, or NAV 2!

The Entegra MFD has many different distinct modes in which it operates.

The main mode, “MAP” features a gorgeous terrain rendering system. This is based on a short-term caching tiling system to optimize performance. Tiles are regenerated on-the-fly throughout flight, on a separate thread from the simulator. Airports, runways, VORs, NDBs, FIXs, traffic, and the flight plan are all overlaid on top of the terrain base map. Engine indications, as well as a brief flight plan overview are also shown.

The next mode, “TAWS” shows the Terrain Awareness and Warning System. It depicts the terrain relative to the current altitude, indicating areas of terrain conflicts on a graduating scale. This helpful mode removes all irrelevant info and lets the pilot focus on safely navigating their aircraft around terrain.

The following modes, “TRIP” and “NRST” are very handy for knowing your flight plan and surroundings. The TRIP page shows your waypoints from the GPS and provides helpful details including the distance, ETA, and estimated fuel at each waypoint. The NRST page shows the nearest Airports, VORs, NDBs, and FIXs. There is also a detailed airport view that shows the runway layout, frequencies, and elevation!

The checklists for the aircraft are also fully integrated into the MFD. The proper procedures for normal flight, emergencies, and system malfunctions can all be viewed and followed.

Of course, the Entegra Engine page is also intricately modeled. It features custom gauges, Lean-assist functionality, and the ability to set the onboard fuel via the fuel-totalizer.

The Entegra pairs perfectly with multiple GPS options. The GPS stack options are:

Note: The default GNS 430 avionics do not expose approach waypoint information. SIDs, STARs, and enroute flight plans will show up on the Entegra MFD, but approaches will not, due to this Laminar Research limitation. If this changes, we will integrate full waypoint drawing. This does not affect the HSI and flying approaches, just the depiction on the MFD. RealityXP avionics show waypoints from all phases of flight without issue.

The SR20 and SR22 have been meticulously detailed to provide for the most in-depth visual model as possible. The aircraft makes full use of 4K PBR textures, ensuring the highest level of visual fidelity. All the different materials are accurately represented from samples from the actual aircraft! The many differences between the Entegra and G1000 versions of the SRs have been integrated, clearly separating the aircraft from each other.

The SR20 and SR22 are equipped with the TorqueSim custom physics – the most accurate simulation of a piston engine for X-Plane! The simulation models the mass flows of air and fuel through every part of the engine in real time. Air enters the engine through the air filter, flows through ducts, passes obstacles like the throttle plate, burns the fuel and leaves the engine as exhaust gas. Pressures and temperatures are calculated in every section independently, all contributing to the different segments of the simulation. All engine parameters are tuned against a huge database of real engine log data to ensure maximum possible accuracy in all phases of flight. The entire engine simulation runs on a separate thread from the main simulator. This allows for the timing necessary for proper simulation, independent of sim frame-rate, but also ensures that the model has a near-zero performance impact on the simulator!

The electrical systems have also been intricately detailed, ensuring every last breaker and switch is modeled. The dual-batteries are simulated with a custom lead-acid battery simulation. The dual-alternator setup and Master Control Unit have been intricately tuned to interface with the rest of the simulation. All electrical busses and circuit breakers are individually simulated to provide for the most in-depth of simulation. All the intricacies of the SR electrical system including alternator drop at low RPM are modeled.

The fuel system has all been custom simulated, providing for unparalleled accuracy in-flight. It models all the details down to the fuel lines and injector nozzles! Fuel temperature is calculated and vapor is formed in the lines under the right environmental circumstances. This also allows for the recreation of all engine starting characteristics usually found on an aviation piston engine like normal, cold, hot, flooded and false starts. So be sure to understand the importance of your boost pump both on ground and in flight! The complex behavior of the engine driven and electric fuel pumps as well as the fuel manifold and metering unit are simulated. Changing bank and attitude of the aircraft affect sloshing in the tank, thus causing the indicated fuel quantity to differ.

The SRs also feature an engaging and beneficial maintenance, wear, and failure model. This aspect of the simulation makes sure that the plane is flown safely and without damage. Excessive wear will be affecting airframe performance and safety, addressed through a realistic concept of runtime-based and annual inspections. The entire wear and failures logic is built on top of the physics model for engine, airframe, and fuel systems. This also includes truly unique features like cylinder detonation driven by the physics engine. Tires flatten, brakes fade when hot, the propeller experiences FOD on unprepared surfaces and much more to discover. Probability distributions tuned with real-world data are used to reflect the increasing likelihood of failures with component runtime.

The flight model is designed with unparalleled accuracy. The tuning of the aerodynamic profile required hundreds of hours of careful tuning to accurately match the real-world characteristics. The model matches the aerodynamic quirks of the real aircraft to the limit of the simulator!

The tail number can be dynamically changed on the aircraft! There are many configuration options to make the plane yours – from changing the tail number color, placement, outlines, drop shadows, all the way to painting it on the wings!

The countless systems are all designed with persistence in mind – when you shut down the aircraft, you will return to it in the state in which it was left, the engine components will take their real times to cool. This encourages the proper care and handling of the aircraft, and shows the consequences of reckless flying. These systems are also designed to run on computers of many different specs.

All the systems are programmed in C/C++ using the X-Plane SDK. No compromises were made for simplicity. The plugins make significant use of multithreading to have the absolute minimum processes running on the main simulator thread, thus helping keep X-Plane performance at its maximum! The Entegra simulation is also very performance cautious. The avionics engine runs on threads separate from the main simulator and caches data as appropriate. Through our testing, performance exceeds that of the G1000 variants of the same aircraft.